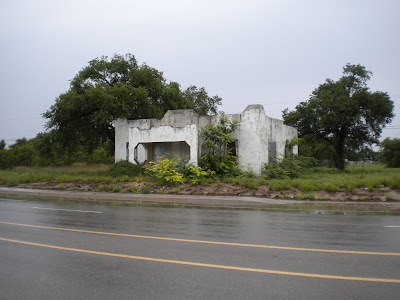 Previously, Ella Mae Quicksilver divined in the stars that she should leave Heber-Overgaard, Arizona and go east to Roswell, New Mexico. Ella Mae’s car broke down in Magdalena, New Mexico where Jessie Long befriended her. But Jessie harbored a fearsome presence in the back of his house and Ella Mae quickly resumed her trip.
Ella Mae arrived in Roswell and her “sense” took her to a small, oddly shaped stucco house for sale on the northwest side of Roswell. There she settled in, avoiding the curious neighbors. In 1927 Roswell was a farming and ranch town, blessed with the Union Pacific railroad and a salubrious climate.
Small town rumors swirled about Ella Mae, including a scandalous story of the death of her parents in a shootout during a Colorado bank robbery. Stories spread that the newcomer traded at the bank in gold nuggets, supposedly from Arizona's Lost Dutchman Mine.
On a warm evening Ella Mae was at her kitchen window and glanced out at the dirt road that ran past her white stucco house. To her surprise, a stranger was walking down the road and she expected the man to walk on by. She gasped as the man turned into her gate and headed up her walk. He glanced over at the window and Ella Mae‘s eyes widened as he reminded her of that movie throb, the one with the narrow face, jet black hair and obsidian eyes. Ella Mae had never seen a man so handsome.
To Ella Mae’s shock the man walked right in the door, pausing to look at her. He was dressed in a white shirt, a chocolate tie and a black suit, reminding her of those evangelicals that go door to door.
Inexplicably, the stranger moved in to the 2nd bedroom. When Ella Mae asked about his suitcase, he waved her away. Blessed with striking Latin looks, the man spoke in a lilting voice that was almost a song. But he rarely spoke, even when they sat on the porch sipping tea in the cool evening.
In the mornings after breakfast, he would walk down the road. The minute Ella Mae took her eyes off him and then looked back, he was gone. She had no idea where he went each day or what he did.
One evening over a simple dinner, she asked where he came from. He stopped, eating, put his fork down and hesitated, then told her he came from far away, a very different place.
“You mean Akron, Ohio? Where they make the automobile tires?” Ella Mae ventured.
The stranger made a face and went back to eating. She could assume he was not from Akron and her sense warned her not to pursue the subject further.
Another time he mentioned he was a scout, surveying the Roswell area. And Ella Mae thought it must be for some business back East. Perhaps some kind of food processing, which would make sense with the railway coming through Roswell. But her intuition told her no logical response would be forthcoming and in her heart she did not want to drive him away.
In the evenings, they would retire to their respective bedrooms. Ella Mae would pause and look at the handsome stranger. She was twenty, never had a boy friend,  never even held hands. The man would nod at her, his face passive, and then disappear into his room. Ella Mae would sigh, wondering.
One night Ella Mae was in bed and she opened her eyes to see an angel standing beside her, holding out a hand with a glowing capsule. Ella Mae opened her mouth and the hand placed the capsule on her tongue.  She swallowed and suddenly felt a twinge, then a jolt, next a shock as if someone had jabbed her in the stomach.
Ella Mae awoke with a start and was surprised to see the stranger standing at her side. He was looking down at her and for the first time there was a faint smile on his lips. Ella Mae was surprised to see an amber glow radiating from her body. Was she dreaming... a dream within a dream?
The next morning over breakfast, she wanted to ask him if he had come to her room. But before she could speak, he announced he was leaving. His survey was complete. He thanked her for the hospitality and wished her well, saying that from time to time he would check in on her. That he would be back.
Ella Mae wanted to protest, but his sharp look quieted her. He got up, nodded and went out the door. She sat at the table in confusion, then jumped and ran to the window. But, of course, the stranger was gone.
A few months later Jessie Long phoned, liking to remain in contact and called from time to time. He mentioned he was going to Socorro, New Mexico and was thinking of driving on to Roswell. Would it be okay?
For the first time, Ella Mae told Jessie about the stranger who had stayed with her a few weeks in the guest bedroom. Jessie was agitated, but she assured him this was just someone who was a friend and there was no romance between them.
Jessie calmed down and confirmed he would drive over the next week. Ella Mae agreed and then added.
“Just so you know, Jessie. I’m pregnant.”