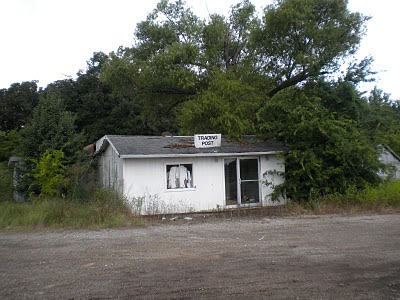 Previously, a stranger visited Ella Mae Quicksilver in Roswell, New Mexico.  Months later Ella Mae gave birth to a green-eyed, six-fingered girl, Averil Jean Quicksilver. One night when Averil was six years old, she pointed to a twinkling night star to the east. “There,” Averil said and Ella Mae knew it was a signal to continue her journey.


After crossing the dry and dusty Texas Panhandle on an early summer evening, Ella Mae sought  refuge in the small town of Nocona, Texas. On Main Street she found a quaint bungalow advertising rooms. She knocked on the door, but no answer. Little Averil had wandered over to the small “Trading Post” next to the house and gone inside. The little girl called out to her mother for help. Ella ran to the shop and was startled to see a thin woman balanced on a stool, a rope around her neck, the end tied to a sturdy beam. Averil was balancing the stool and whispering to the distraught figure.
“Not now. We have plans for you.” Averil said to the woman as she regained her footing on the stool. Ella Mae helped her down and they went to her bungalow where Ella  made tea and asked for a room.
In the morning over coffee, Peggy Ann explained she had lost her husband and daughter to the deadly flu. She had proved immune and survived. Peggy had put stock in working at the town's boot factory, but that day Nocona, long famous for making cowboy boots,  had lost a critical new contract. Peggy Ann spiraled into depression, losing her last hope as she was to have a position in the plant. Thus, the rope over the beam in her closed Trading Post, another bitter disappointment.
Ella Mae thought to move on, but her daughter, Averil, insisted they stay for awhile. There was nothing in the sky Averil Jean told her mother. And besides, she related, there was work to be done in Nocona.
Days later Freddie James drifted into town on a stormy summer night. He sought refuge in the Misty Times Saloon, where Peggy Ann helped out in the evenings.
Peggy Ann introduced Freddie to the boys who were playing cards. Freddie joined the game and soon cleaned out the circle. The boys were uncommonly drunk as they were still depressed from the news that the U.S. Army had awarded their new boot contract to a firm in Minnesota. Nocona Boot had been banking on the business to revive the small Texas town.
It was the mid-1930s and Europe was stirring, so there was a modest effort to upgrade the U.S. Army. Boots were a first step. The loss of the contract hit the town hard and Freddie, a natural card sharp, found the besotted boys easy pickings, which added to their woes. Tempers flared when Freddie pushed back, gathered his stack and announced, “time to go".
The boys hustled Freddie outside, lassoed him and tied him to the back of a truck that had been bought in anticipation of the boot contract. They planned to drag Freddie to the town line. Peggy Ann ran out and pleaded to let Freddie go.
Hearing the commotion in the street, Ella Mae and Averil peeked out of their door. As the truck dragged Freddie past them, he tripped in a pothole and fell, hitting his head on the curb. The boys and Peggy Ann looked on in horror as Freddie slowly raised himself.
Gathering around Freddie, their faces were flushed and voices slurred, the boys were convinced they were delivering the grifter panhandle justice, seeing themselves as judge and jury.
Peggy Ann tried again to reason with them, bring with to their senses. But the bad news, the ensuing drink, and Freddie’s sleight of hand fueled their fury. The boys headed back to the truck intending to resume their dragging.  Before Ella Mae could react, Averil slipped out from behind her mother and went quickly to Freddie’s side.
The drunken men paused and gaped at the little girl with the six digits, a thumb and five fingers, not sure if it was a blessing or a curse. They watched silently as little  Averil bent and undid the chain, freeing Freddie who rubbed his head and blinked at the quiet crowd. Without a word ,but a nod to Averil, Freddie shook off his chains and ran down Main Street, vanishing into the dark.
Staring angrily at the little girl,  they were startled by her sudden strange glow, and the compelling look in her glittering green eyes struck them mute.
“The Good News is coming and you will profit.” Averil said to the boys, and then hid behind her mother.
The next day a shock. The Army informed Nocona that the boot award to Minnesota had been reversed due to irregularities.  Nocona Boot was given the new contract. Could they produce 500,000 pairs the first year?
Peggy Ann was asked by plant management  to undertake public relations and liaison with the U. S. Army. The town was cautiously optimistic, perhaps their luck had turned.
Ella Mae stayed on, sitting on the porch every night and watching the sky. One evening Averil said she could not sleep and joined her mother.
“There it is.” Averil said from her mother’s lap. And Ella Mae nodded, seeing the star to the east. Time to go.
In the Texas Panhandle, folks often make a pilgrimage to Nocona, Texas to visit the Trading Post which stands empty. It is an odd reminder of times gone by and the strange little girl who changed the town’s luck.
Posted by Tom Reese at 9:30 AM