Our Lady of the Mountain, Magdalena, New Mexico 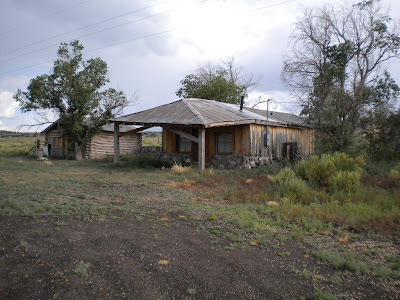 Previously, Mary and Johnny Quicksilver were fatally ambushed in 1924 during an attempted Telluride bank robbery. Their precocious daughter, Ella Mae, successfully took over the antique and bake shop, Enchantment, in Heber-Overgaard, Arizona.

One summer evening Ella Mae Quicksilver was on her shop porch after a violent thunder storm crackled through the area. She stood gazing at the sky and saw a shooting star falling to the east. Suddenly a beam of light enveloped her, riveting her as if she were struck by lightning.
Ella Mae fell back in her rocking chair. She knew it was a sign, a signal to move on. That week she sold her antique and bakery business, packed essentials such as her mother’s gold nuggets in her her 1926 Ford touring sedan and drove southeast through Showlow to U.S. Route 60.
Just outside of Magdalena, New Mexico her car stalled and she coasted into the drive of a modest ranch set perpendicular to the two-lane road. It was early evening and she knocked on the door, which was opened by Jessie Long Mansell, a wiry, leather skinned rancher in overalls. Ella Mae explained her  touring car had broken down and asked for assistance.
Jessie invited Ella Mae in and appraised his visitor, a slender young woman with high cheekbones, dark eyes and long black hair, clearly Indian blood, perhaps Apache. Jessie offered Ella Mae a room for the evening, saying he would look at her car in the morning.
Over dinner, Jessie explained he lived alone in the front part of the ranch, saying the back portion was closed and Ella Mae should not venture there. He said he had lost his wife and children in an Indian raid a few years back, one of the last Mescalero Indian ventures into the area, which was now peaceful.
Strangely, the young girl of Apache descent and the old rancher clicked, seemingly comfortable with each other. Ella Mae was bright and also had the “gift”. She sensed she would be safe with Jessie Long. Still, a black cloud seemed to hang over the homestead. There was something strange in the forbidden back of the house. Occasionally Ella Mae heard a snarling voice and scratching, perhaps a dog, a wolf?
After dinner they sat on the front porch in rocking chairs  gazing at the Magdalena Mountain, the angelic face seemingly carved in the form of the biblical Magdalena, our Lady of the Mountain.
Ella Mae told Jessie she was heading east and would stop in Roswell, as she had a dream that her future was there in that ranching and farming town. Jessie Long scoffed saying she was better off in Magdalena with its mining of gold and silver.
Their discussion was interrupted by another car that swung into the drive and a tall, attractive redhead emerged along with the driver, a medium sized, dark-skinned man with a U-shaped face and a nasty turned down mouth.
The surly looking man pulled a revolver while the redhead gazed at them with an evil smile. The man demanded Jessie Long’s gold and money. Ella Mae thought of her treasure, which she had secreted under the back seat of her touring sedan.
Of course, Jessie protested the intrusion, saying there was no gold and little money. But the man waved him away, while the redhead went inside and rummaged through the house.
After a few minutes, the woman emerged and shrugged with palms up, but noted the back half of the house was sealed. The man frowned and asked Jessie Long for the key. Jessie said a key was hanging on the wall, but added:  “You don’t want to go back there.”
The man laughed,gave the revolver to the redhead and then he went to the back of the house and opened the door. There was a moment of quiet, then voices. The man shouted and shouted again, hoarser the second time. A few seconds of quiet followed, and then the man screamed.
Ella Mae felt an icicle prick her heart. Jessie Long looked down at his shoes and sighed. The redhead went stiff, pointing her gun at the inside of the house, then back at her captives.
It was if the man’s screaming went on for hours, but it was over in seconds and the three of them stood in the quiet. The night bird’s song stopped, even the owl in the cottonwood tree and the insects were shocked into silence.
Without a word, the Redhead put the revolver in her bag and retreated to the car. She asked Jessie to crank the Model T, warning of the “kick back”. Jessie Long obliged her and the redhead screeched out of the drive, heading west into the black night.  Ella Mae was wide-eyed as Jessie returned to the porch. He paused at the steps and looking up at the ashen Ella Mae.
“Don’t ask.” Was all Jessie Long said.
Posted by Tom Reese at 4:02 PM