The Cure at the Basin Waters, Eureka Springs, Arkansas 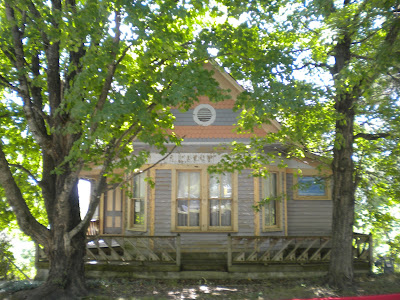 Previously, Ella Mae and Averil Quicksilver had to flee the Natchez Trace in Mississippi as Sam Bradford, a wealthy Louisiana deal maker, relentlessly pursued the mother and daughter, hiring an assassin to kill them. The two psychics knew that Sam had murdered his wealthy wife.

After escaping from Mississippi, Ella Mae and Averil settled in Eureka Springs, Arkansas, known as a spiritual and healing center in the Northern Ozarks. Ella perceived positive energy in Eureka Springs, so they bought a Victorian house on a hill, establishing the Eureka Psychic Center. Many ill travelers sought the curative waters of the "Basin Spring" and found their way to the Psychic Center to learn what their future held.

Sam Bradford sick with the cancer traveled to Eureka Springs to take the basin waters and the cure. After having soaked in the magic baths and drunk the bottled basin spring water, Sam felt better and was upbeat. He decided to stay in Eureka Springs for a few weeks and sent his servants back to New Orleans.
One night on a whim, Sam visited the Psychic Center which he had learned about from the hotel staff. It was short walk from the hotel and he paused outside the small Victorian, studying the gingerbread house.  He recalled the strange note from Shadowman, his hired killer. The killer had quit the job after finding the two women on the Natchez Trace, returning the retainer to Sam with a cryptic note, Eureka Springs.
As Sam stood on the sidewalk, he felt an attraction to the location, a sensation he found vaguely familiar. With some trepidation, he went up the steps and rang the bell, which was immediately answered by young girl in a shadowy hood. Without speaking, she beckoned for Sam to enter the dim hallway. Unexpectedly, she took his hand and led him to the living room lit with candles. The girl led him to couch where he took a seat. Sitting in an arm chair in a dark corner was a slender woman, also wearing a hood.
Sam sniffed the sweet incense floating in the quiet room. The woman gestured for Sam’s hand, which he gave her and she ran her fingers over his palm.
“You’re in remission.” The Seer said. “Good for you. Time will tell.”
Sam relaxed. Indeed, he was in remission. His doctors said it was miraculous, one of those improbable events that had nothing to do with the quacks in Eureka Springs. It did not matter to Sam and he welcomed the good news. Always alert to possible investment opportunities, he would continue his curative routine and observe others who came for the treatment.
“Shadowman abandoned you.” The woman in the corner said.
Startled, Sam leaned forward and he recognized these were the same two psychics from Rue Toulouse, the ones who had saved his fortune. But also they knew he had drowned his wealthy wife in a contrived boating accident.
He held up his hands, palms open, a gesture to indicate it was all a misunderstanding.
The woman in the corner laughed and then beckoned for her assistant to come forward. Sam was startled as the young woman dropped her hood, revealing her alabaster face set off by jet black hair and dominated by wide green eyes. Looking into those riveting eyes, Sam Bradford felt a violent shock and he involuntarily slid out of the chair onto his knees, bowing his head.
“My fortune is yours.” He said. “I am your acolyte.”
The girl looked at her mother and smiled.
“Our movement has begun.”