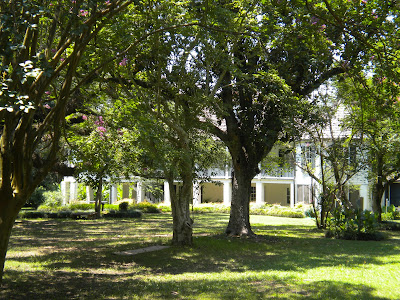 Previously, Ella Mae departed Nocona, Texas traveling to Natchitoches, Louisiana. Her daughter, Averil Jean, enrolled in the sixth grade at the Hanna School. A mysterious woman in white instructed Averil and her mother to visit the Myrtles Plantation, a place of evil with a need for justice.
Leaving Natchitoches early on a winter morning, Ella Mae and her gifted daughter drove along Route 40, a two-lane black top rutted by recent rains. They arrived early afternoon in the sleepy city of Alexandria and Averil Jean directed her mother to the imposing Myrtles Plantation, a structure of antebellum architecture, featuring a 100 foot white-columned portico and set among towering oak trees that lined the drive.
Ella Mae stopped the car and put her hand to her throat, never having seen such a beautiful structure. She dutifully followed the signs to the service entrance and told Averil to stay in the car while she went to the door.
Ringing the bell, Ella waited with fluttering in her stomach. What were they doing in such a grand setting? She asked herself.
Fortunately, the handsome estate manager, Beau Raspberry, opened the door, his eyes widening as he saw the comely Ella Mae. There was something about the woman before him. She was obviously of Indian descent, graceful with flowing black hair, a chiseled face, aquiline nose, and dark eyes that telegraphed intelligence.
Beau’s mind raced as the woman told him she was looking for work. There was the Myrtles Thanksgiving open house in a week and his assistant had taken ill. He was in desperate need of an intelligent helper and the alluring Ella seemed to fit the bill.
Ella and Averil were quickly settled in the back section of the house, formerly the head butler’s quarters. Beau put Ella to work on the party preparations, while Averil attended the plantation school.
One evening while Beau was directing a practice run, Averil wandered behind the house, coming to rest at the dock that overlooked the slow moving Cane River. She sat and closed her eyes, suddenly hearing music, a slow tempo waltz that drifted on the crisp fall evening. To her amazement, the dining room French doors flew open and two people emerged, a portly gentleman carrying a picnic basket, accompanied by a lovely, blond lady in white.
Averil watched as they walked to the beach beside the pier and climbed into a teak rowboat, casting off and moving upriver, then drifting with the languid current. The woman sat in the back and bent over to pour champagne and serve canapés when the man suddenly grabbed her feet and flung her backwards over the stern. He then stood, taking an oar and swatting the struggling woman who was tangled in her elaborate gown. In a few seconds, the woman in white sank.

The man than rocked the boat until it flipped over and he tumbled into the water. He surfaced and laboriously swam to shore where he pulled himself up on the beach, then collapsed. Moments later a servant appeared on the porch, scanned the river for the couple, and saw the man prostrate in the sand, quickly sounding sounded the alarm.
Averil opened her eyes and understood all…the woman was Alice Lacount and her husband, Sam Bradford, had murdered her, feigning the boat tragedy. Alice was the woman in white, the woman crying out for justice that she had met at the Hanna School. Averil now knew it would soon be time to move on and find the nefarious Sam Bradford.
Back in the mansion, after the practice and Beau Raspberry had gone to his quarters, Mae retreated to the kitchen with Chloe, who led the kitchen brigade. She and Ella had become friends and Chloe had confided that at one time she had been close to Beau. Chloe had rebelled when Beau took up with a younger servant, but Beau put her in her place by slicing off her right ear, which explained the head wrap she wore. It was Beau’s retaliation for Chloe listening at the door when he was dallying with his new desire.
Once alone in the kitchen, Chloe revealed that she was a mixture, a blend of Hoodoo and Voodoo royalty. Not only did she worship the Grand Zombie, the snake god, but she also had the ability to conjure. As such, she recognized the royalty in Ella Mae, but was puzzled by Averil Jean, Ella Mae’s daughter who cast an aura and had six fingers on each hand.
Ella explained that she was descended from a Yavapai-Apache princess, and that Averil‘s father came from far, far away and Ella motioned to the night stars, recalling the dark stranger who had wooed her when she lived in Roswell, New Mexico.
The two women agreed that Beau was evil and they must rein him in. Chloe said she was biding her time, but would soon extract sweet revenge.  Ella told Chloe to be patient, that she would arrange a setting for the lascivious Beau Raspberry after the annual affair.
Two weeks after the successful open house, Beau Raspberry made his move, always a feint to disarm the new quarry. He invited Ella Mae to join him at the caretaker’s small house located in the woods, a brisk walk from the manor. The pretense was to consider refurbishing. Ella eagerly agreed and that evening they walked to the cottage, pausing at the front door, which Beau unlocked.  Anticipation ran through Beau to his bones, but when he looked down at Ella’s shining face, he suddenly felt a chill and doubt.
“Maybe now is not the right time.” The hesitant Beau said.
“This is the perfect time.” Ella replied and pushed him into the dark cottage.

Later that night when all was quiet and clouds were scudding across the three-quarter moon, Ella took Chloe to the caretaker’s cottage. The two of them paused as Ella turned the key and opened the door. Chloe gasped as she saw in the faint light Beau tied to a chair in the middle of the room, his clothes neatly piled on the floor. Ella handed Chloe a Bartlow hunter’s knife with a gleaming 6” blade and a honey stag bone handle, just right for gutting.

As Ella walked away the clouds obscured the moon and the night creatures were silent. Even the old owl in the oaks was quiet. That was when the shrill screaming started and Ella knew it was time to move on.
Averil had been importuning her mother to travel to New Orleans where there was someone who needed to be called to account.
The two left early the next morning.