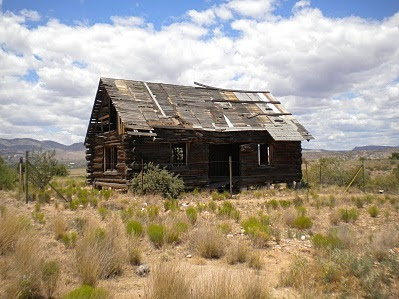 Max Bueler and Evening Star, a woman of Yavapai-Apache descent, lived on a mesa outside of Dead Horse, Arizona.
Handsome Max prospected, but they survived on nuggets Evening Star gathered from her ancestral yellow mine.The location of the mine was known only to her and Max.
Years before a drunken Dutchman had stumbled upon the mine, taken some nuggets, but to protect his fined, he claimed his nuggets came from a remote mine in the Superstition Mountains, southeast of Phoenix.
One evening Max stopped at the Mile High Saloon, washing down a few with Lilly, the new piano player, who was curious about Max's gold nuggets and she plied Max with drinks and hints of delights to come.
Later in the week, Evening Star rode to the  ancestral lode and saw two horses tied to a Pinon Pine. She heard familiar voices and echoing laughter inside the mine where Max and Lilly were gathering nuggets. Visions of San Francisco finery and high society danced in Lilly's mind.  Max thought only of the alluring Lilly. As they hugged in the shadows, Lilly slipped her stainless steel hunting knife from her thigh sheath. Max dreamily whispered in Lilly's ear and in response, she sank the 6" blade into Max, just under the ribs, angling up to his heart.
Max reared back with a roar and Lilly stood wide-eyed as blood dripped from the serrated blade. Instinctively, Max drew his pistol and fired a shot into Lilly, and then he dropped dead. At that moment, boulders cascaded down and blocked the entrance to the mine. Lilly stumbled to the sealed entrance, clawing furiously at the rock, calling out hysterically and clutching her nuggets to her chest.  Bleeding profusely, she fell prostrate in the swirling dust.
Enraged and panting hard, Evening Star stood above the mine with her fulcrum tree limb and howled in despair. She clamored down and inspected her handiwork, satisfied that a casual traveler wouldn't notice the sealed entrance. The Yavapai mine was in a remote canyon between the Black Hills, tucked back in a sage-blocked draw and left no tell-tale tailings. How the drunken Dutchman had stumbled into the mine was always a puzzle to the Yavapai-Apache.
Later that evening in the dead of night, Evening Star packed her essentials and a cache of nuggets and left her beloved cabin above Dead Horse. She rode east along the Mogollon Rim to start a new life. As she traveled, the wind whistled in the stately Ponderosa Pines causing Evening Star to pause. In the half-moon light she glanced a figure in white, as if someone was there amongst the pines singing a mournful tune and calling her name.
Was it just the wind?
Or was it Lilly?
Posted by Tom Reese at 4:31 PM